„By The Gony State“ is the new album by Huey Walker. The artist who grew up in Berlin currently lives under his bourgeois name Martin Hiller in a middle-sized town near the baltic sea.

Huey Walker – By The Gony State

For his often long-form music, Huey Walker works with various playing techniques, composing concepts and soundsources. Some releases are based on guitar or audio-installations with multiple guitars being played by waterdrops, pendulums and dropping objects. Others are based on systematically processed material. And anothers ones are joyfully improvised romps on hand- and machine-made sounds with heart and wit.

„By The Gony State“ comes on a CD in a 7inch-sized sleeve, as well as a digital download via bandcamp.

All music on the album „By The Gony State“ was composed by Huey Walker utilizing his concept of „Transpulsitions“. As an algorithmic routine, Transpulsitions refers to the ideas of transforming by re-organizing, re-positioning and re-pitching.

Bits of audio are systematically extracted from source-material. By slowly changing their root-positions rhythmically, those bits of sound transform from a slowly soothing to an urgently urging pulse – and vice versa.

Composed with the concept of Transpulsitions

The resulting pieces shift through slow transistions, changing, almost morphing through their rhythms, harmonies and tonalities. The music is steady-going and propulsive, yet also soothing.

The tracks alter through various states, stumbling through fields of soundscapes, flowing from a captivating groove into polyrhythmic madness and segments of joyfully odd, pitch-bended vocals.

The music made with „Transpulsitions“, even though based on the processing of a chosen material, is neither sampling-, nor loop-music. Bits from specific, slowly changing positions from source-material are sort of read out and re-arranged into an ongoing pulse of sound.

What sounds and feels like such here, is not loop-music at all. It’s more like a shifting and blending, almost like a parallactic scrolling through various layers of sounds. I mean layers you make out as a listener, not necessarily those you think of while composing. Since there is some aleatoric dimension in composing with the algorhithm of „Transpulsitions“, there are – even for me – many ways this music can be heard.

While editing and mastering the tracks, i mostly listened to the more strumming-like sounds of the tracks. They are very present in the final, album-titled piece, but also can be heard throughout the first three tracks. While doing the final mix, i realized, that there are still a very lot of vocals in these songs. Since they are severly pitched, they radiate some kind of strangeness. When it comes to the sampling/processing of music, the path of completely weird-pitched vocals is not often gone. They might be cheesy, comical or even frightening. Non-human-like timbres in vocal-oriented music are still, i mean in the so called western tonal system, one of a very few principles, that might irritate, surprise or even unease the listener. I always loved that. I really like to play old 7-inch-recordings on the „wrong“ speed. This makes me happy and leans the music in a completely new direction, unfolding new dimensions, making the voice an instrument again. I make extensive use of that in my more plunderphonic- and vinyl-based recordings.

Within „By The Gony State“ the voice-based parts can be challenging sometimes, but in the overall evolving pulsation of the pieces, you can happily make it through them.

While in one layer – meaning a frequential dimension, some genuine rhythmical unit or another thing you focus on as a listener – there might be an ongoing groove, another layer completely goes nuts and arhythmically looses its contact to other segments of the piece – be it rhytmically or harmonically. But the pulse brings cure: things, that just went off the rails, slowly find their place in the whirlwind of sounds again. What might sound weird and off-beat at a first glance becomes reasonable and catchy in its repetetive maelstrom of ongoing changes and chances. Although things seem to be repetetive, no phrase is repeated once. Every bar is a transformation of its predecessor. In their onwarding movement, they are all part of one pulsing maelstrom of a morphing vortex of music.

Someone, who’d heard some early versions of the pieces asked me, if i had gone completely mad now. My response was simple: put some housy-tickering beat under that and you have your cosy-easy-cheesy electronica-thingy.

Exactly doing not that is just one conceptual core thought in this work.

(Huey Walker on composing and listening of „By The Gony State“)

Even though there is a very lot of melodic information in the tracks, they are highly repetetive and minimal in their musical structure.

„By The Gony State“ collects four musical movements. While the first three pieces explore various tempers of soothe and challenging strangeness, the eponymous track „By The Gony State“ unravels tight grooves and captivating rhythms within its Transpulsitions through 20 minutes.

Artwork with Drawings by Martin Hiller

The Artwork is based on two drawings by Martin Hiller. The Layout has been done by Nouvelle Walk – Atelier für visuelle Wege.

The CD-Release of „By The Gony State“ comes in a black 7-inch-sized sleeve with a center hole containing high quality prints on heavyweight paper, two inlays with liner notes and photographies of Huey Walker performing live in 2016 plus some neat stickers.

A collection of four 1min-video-trailers was made. Each one made for being played as a loop, paying tribute to the mantra-tantra-like, joyfully repetetive and slow-throttled boppy feel of the music. Depicting right exactly that: the joy of deceleration and dance. 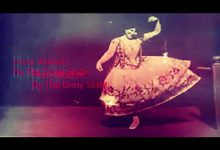 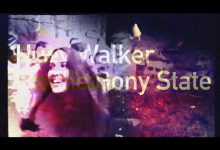 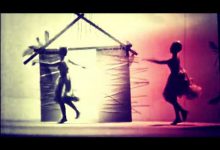 Martin Hiller aka Hurley Wake plays free improvisational music. His live-playing is based on a looping-setup that allows various time- and spectrum-based manipulations on the fly. Utilizing also randomly generated beats, his live-sets can turn from drony psychedelia to scuttling beat madness and vice versa. Luscious Lockdown Lullabies, 17.03.2020 This recording was made on March […]